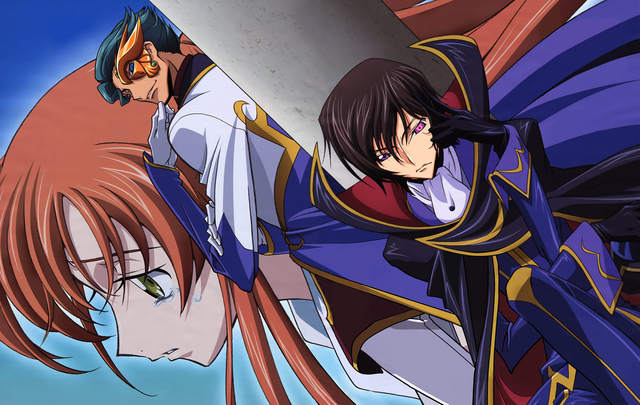 Old news I'm sure, but for those who have miraculously happened upon this small blog, perhaps immediately after relieving yourself of the giant rock you'd been living under, Code Geass is returning! The original cast are to appear in a spinoff OVA Nunally In Wonderland. As the name suggests it is set in the world of Lewis Carroll's Alice's Adventures in Wonderland. Lelouch grants Nunally a treat using his Geass ability and they piss about in and around Wonderland. I'm sure it will be as awful as it sounds.


...I suppose it doesn't sound too awful, does it? I can't imagine Sunrise or CLAMP cocking up harmless fun too severely. If it somehow manages to be worse in parts than R2 was then I may have to eat my hat. With expectations reasonably low, I can hopefully expect to be pleasantly surprised. However now that I've made known to myself and any other readers my low expectations, it occurs to me that I may just have BIG expectations after all and only speak of them as small to prevent severe disappointment. That is to say, I may just be lying to myself. But no matter how bad it may be, viewers are at least guaranteed a glimpse of C.C. as the Cheshire Cat. Perverts, eat your heart out.

Code Geass: Nunally In Wonderland is out July 27th 2012. But if Nunally faffing about in Wonderland with a bunch of CLAMP noodle people doesn't pique your interest, perhaps more CLAMP noodle people battling it out in Knightmare Frames amidst political intrigue the old fashioned way, all accompanied by a Yoko Kanno score and directed by the man behind Escaflowne, will.

Code Geass: Akito The Exiled, set for release this Summer, takes us back to 2017, the year in which the events of the original series, Lelouch obtaining his Geass, launching a bitter, scathing rebellion against Britannia and whatnot, began. In this theatrical OVA series, we are introduced to Akito, a member of the newly formed W-0 special unit. After a mission to recapture St. Petersburg fails at the hands of the E.U. Army's 132nd Unit, the W-0, along with Akito, are sent in to make a rescue. Surrounded by Britannian troops, I'm sure any person in this situation would take great comfort in the knowledge that brooding teenagers with foffy hair and no dicks (lolCLAMP) are on their way to bally well fend off these Britannians and bring the boys home.

My hopes for this one, unlike Nunally in Wonderland, are VERY high. One of the things that made Code Geass Season 1 such a great show, aside from the fabulous scheming bastard Lelouch keeping everyone on the edge of their seats, was the Knightmare battles. Before R2 and all the zippy super robot bullshit happened, the Knightmare's were ground based and battles were fought with great consideration for pacing, tactics and general brilliance. From the looks of Akito's promo we can expect more ground battles, which is great. The one thing that might turn out to be the pube in the punchbowl is the rendered 3DCGI put to use on the Knightmare Frames. As for that issue, I can only assume Sunrise and CLAMP know what they're doing.  It's either that or they've really run out of cash this time. Sunrise wrote the book on the real robot genre, and I don't see any point in them carrying on any of the bullshit found in R2's Knightmare superpower asspull battles and dragging them into a military setting just to appease the R2 fans. If CGI happens to be the worst thing about this new series, then I'll happily live with it and probably enjoy it to bits. I'm particularly looking forward to seeing KMF Alexander in action. I mean, just look at this thing. It's all round, it's all rollerskates, it's all fucking brilliant.

Posted by Dominion Ryvius at 05:50